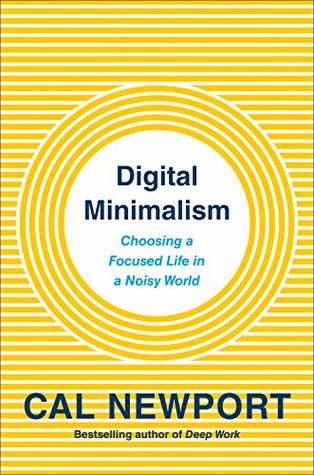 Digital Minimalism: Choosing a Focused Life in a Noisy World

How can one stay focused when our mind is under constant attack from the supremely well engineered attention-grabbing machines that Facebook, Twitter, Instagram, and many others have become? The insight that the primary purpose of these services is not to improve the lives of us, their users, but rather to maximize the time we spend interacting with them is not new. The premise of Newport’s book therefore is almost self-evident: We need a novel approach to dealing with these highly addictive tools if we want to extract the (marginal) value that can be gained from them whilst avoiding most of their detrimental consequences.

Digital Minimalism offers such a “philosophy of technology use” beyond the simple, but oftentimes unhelpful, advice that we should just stop engaging with social media altogether. Newport rather suggests that we deal with them more intentionally, starting with a rigorous “digital declutter” process to help us better understand in which circumstances we get which benefits out of them and consciously evaluate if that’s really the best way to attain those benefits. Using Facebook to stay in touch with relatives living overseas for example may seem like quite a reasonable idea, but under close scrutiny one could easily find out that a regular phone call instead would provide space for much deeper interactions while avoiding all the negative consequences of extensive use of the platform.

Newport provides countless examples along those lines, combined with “practices” that the reader is asked to try out on their own. He’s cautious against prescribing a simplistic ten-step-program though, and instead tries to showcase many different techniques that have proven helpful to some.

Interestingly, the book oscillates between the concrete problems provided by 21st century social media use, and age-old philosophical questions. The former may or may not be a huge obstacle to a fulfilled life for the individual reader, but the latter is doubtlessly insightful for anyone. Increasing one’s time for reflection in solitude (i.e., without “input from other minds”, as Newport defines the term) for example, or actively engaging in value-creating leisure activities such as learning a craft or seeking out social interactions through “joining things”, are worthwhile pursuits that will almost automatically reduce the time one spends on-screen but at the same time are surefire ways to increase life satisfaction in general.

It is this general-purpose usefulness that I enjoyed most about Digital Minimalism. The surprising shortness of the book and its sudden ending at a point where I felt much more was to be said on the topic was a bit of a downer though. Let’s hope, that Newport will follow-up with another publication along the same lines soon.