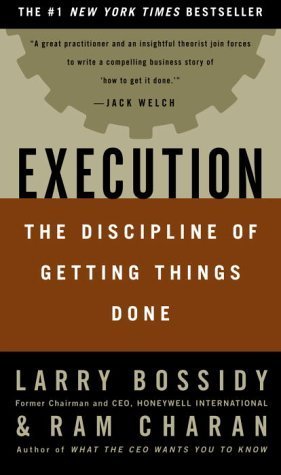 Execution: The Discipline of Getting Things Done

How is it that some organizations consistently achieve the things they set out to do, while others struggle so much? In Execution, former CEO Bossidy and business consultant Charan explore this question by analyzing leadership behavior. They argue that leaders who get the “three core processes of execution”—the people process, the strategy process, and the operation process–right have a much higher chance of success than others.

The examples used in the book are mostly taken from large enterprises like General Electric or Honeywell (both of which Larry Bossidy was CEO or Chairman at times) and might not always immediately resonate with the reader. However, if one is willing to cut through a bit of blunder and tries to relate billion dollar issues with those that are equal in structure at smaller teams or organizations, a lot can be learned.