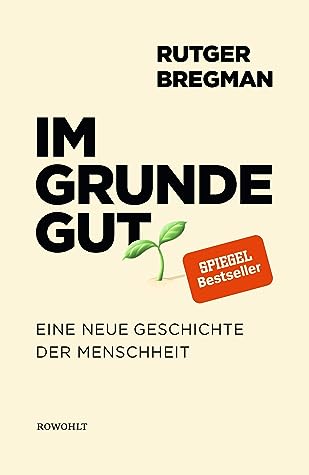 Human beings are inherently selfish, bad, and cruel. Constantly, we’re on the lookout for personal gains and will instantly sacrifice the wellbeing of others whenever it suits us. That, broadly speaking, has been a very prominent view of human nature for a long time. Psychological experiments which apparently demonstrated just how bad we really are have been all over the place, particularly in the 1960s and 70s. The infamous Stanford Prison Experiment and the Milgram Experiment are just to widely publicized examples which get cited over and over again to this day. Needless to say, this view of human nature also helped to underpin the neoliberal consensus that individuals in an economic system can be reduced to “gain-maximizing machines”.

But how, asks Rutger Bregman, can this theory account for the endless amounts of kindness, compassion, and unconditional help that is evident wherever we look—if we only dare to look, that is? The answer is quite simple: It can’t, because it’s fundamentally flawed. Humans beings, according to Bregman, are inherently good. Left to our own devices, we’re eager to cooperate with each other, to help out those in need, and to sacrifice our own pleasure for the benefit of others.

In “Im Grunde gut”, Bregman follows an extremely thorough approach: One by one he picks apart the most prominent historical examples used to demonstrate our innate selfishness, and counteracts them with facts. The Standford Prison Experiment for instance? As it turns out, the guards were actively incentivized by the scientists who ran the experiment to act as cruel as possible. Attempts to replicate its findings in unbiased environments have not only failed, but they yielded the exact opposite results: After a couple of days, guards and prisoners turned into friends rather than mortal enemies.

Bregman tracked down countless academic studies as well as “real-world experiments”, such as the case of a group of boys stranded on a remote, desert island. Rather than a “Lord of the Flies”-ish nightmare, it turned out that without parental supervision they quickly developed a cooperative society which helped them survive on their own for years—as opposed to tearing out each others throats.

He finishes the book with a rather drawn-out chapter on the implications of his findings: If we were to fully adopt the view that humans are good by default, how would that change the design of our education and healthcare systems? Our prisons? The economy? Bregman showcases inspiring examples in each category that demonstrate that a shift in our basic assumption about human nature will drastically alter how we should construct our societies. Let’s hope that his book, as well as the semi-related but more historically focused “The Dawn of Everything” by David Graeber and David Wengrow, will be read not only by social scientists and historians, but also by policymakers and industry leaders.