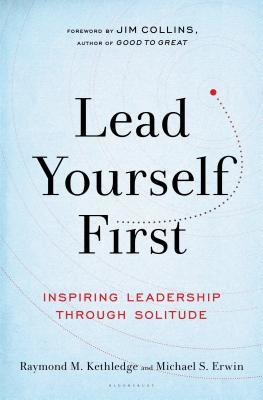 The privilege to lead comes with great burdens: An effective leader has to make tough decisions which directly affect the lives or livelihoods of countless others. It’s essential, therefore, to bring utmost clarity of thought, deep creativity, emotional balance, and moral courage to the table. But how can one genuinely do that when surrounded by flying bullets, detonations, and wounded or dying friends and companions? Or, as is more common these days, by constantly buzzing and chirping smartphones and a non-stop onslaught of e-mail, instant messages, and breaking news?

Kethledge and Erwin set out to answer that question and to understand how particularly outstanding leaders dealt with their most challenging situations. Thereby, they uncovered a surprising common thread: Time spent alone, without “input from other minds”.

Regardless if it’s the courageous strategies with which Abraham Lincoln and Ulysses S. Grant prevailed throughout the U.S. Civil War, the boldness with with T.E. Lawrence fought in Arabia in 1915-18, or General Eisenhower’s all-or-nothing decision about the launch of the Normandy invasion that would liberate France in 1944—none of these endeavors would have succeeded hadn’t the protagonists engaged in productive solitude.

While it feels like that at times, the authors don’t solely focus on the military though. They also portrait Winston Churchill, Martin Luther King Jr, Marie Curie, and Jane Goodall, among other historical examples, as well as lesser known contemporary practitioners of solitude. But their argument holds true in the civil world as well as on the battlefield, and in the 1800s as well as today: In order to effectively lead others, one has to learn to lead oneself first which is impossible without time for reflection and deep thought.

Admittedly, this insight may sound a bit superficial, partly even self-evident. But the way in which the authors chose to present their case, with detailed example after detailed example, definitely reinforces an already interested readers’ determination to spend more time in solitude. However, the book would have benefitted from more specific practices that one can try. While I personally can relate to the example set by co-author Michael Erwin who uses long runs for thinking and strategizing, or by Churchill’s practice of understanding through writing, these may not resonate so well with a more skeptical audience.