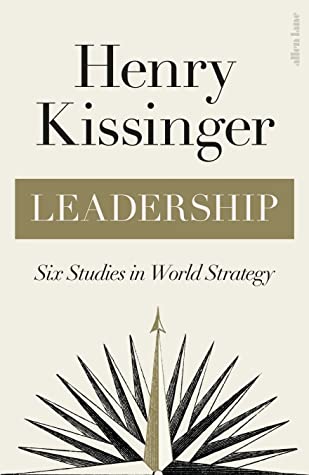 While centenarians do occasionally pop up as protagonists in literature, it’s a rare occasion to see one actually writing a book themselves. Henry Kissinger however, at age 99, begs to differ: In Leadership, he’s not only looking back on a centrury of world politics (which he himself shaped to no small degree). But more importantly, he examines what made some of the epoch’s most influential leaders so effective.

Starting at the end of World War II, Kissinger first shines the spotlight on the personality of Konrad Adenauer and his “Strategy of Humility”. Germany had lost the war and public morale was at an all-time low. But thanks to Adenauer’s characteristic combination of a stoic acceptance of reality and a positive vision for his country’s future, he managed to set Germany on a path towards prosperity. Furthermore, Adenauer slowly and steadily built trust throughout the world in the fact that an economically thriving Germany would no longer pose a threat to global security.

The approach of Charles de Gaulle, the second leader Kissinger selected for his book, is as far from humility as one could imagine. What Kissinger termed the “Strategy of Will” rather resembles either ignorance or a complete negation of reality. When the little known French military general in exile proclaimed himself “Leader of Free France” at the height of his country’s occupation by Nazi Germany, he walked a tightrope between audacity and madness. But either or both of these qualities made such an impression Winston Churchill that he chose to put Britains’s full support behind de Gaulle, which ultimately culminated in the allied victory in 1945.

The book’s most controversial chapter covers the one leader that Kissinger himself was most intimately familiar with: Richard Nixon, who today is most famously remembered for his resignation over the Watergate Scandal. Kissinger served first as his National Security Advisor and then as Secretary of State. During Nixon’s one and a half terms in office, Kissinger and Nixon together significantly changed the world order in ways that are not as often highlighted. Most prominently, Nixon ended the war in Vietnam. But he also established diplomatic relations between the U.S. and communist China and successfully negotiated nuclear arms control measure with the Soviet Union. Reading the chapter on Nixon, one can almost feel Kissingers’ regret that these important positive contributions of the Nixon administration are largely overshadowed by domestic controversy in recent memory.

Kissinger then turns his attention to a lesser known, but no less influential personality: Anwar Sadat, president of Egypt from 1970 to 1991. His time in office was colored by the repercussions of the Six-Day War in 1967 and the ensuing Yom Kippur War (1973) between Israel and ist Arab neighbor states. Sadat’s contributions to world peace in that challenging environment can hardly be overstated: He brought the era of armed Israeli-Arab conflict to a halt, an effort for which he received the Nobel Peace Price but which also cost him much credibility in the Arab world and ultimately his own life. Sadat was murdered in 1981.

Next, Kissinger draws the reader’s attention as far away from Europe as possible—namely to South East Asia: In the chapter on Lee Kuan Yew, Singapore’s defining leader, he draws a picture of a man who imprinted his own impressive personality deeply and unmistakably on his country. The “Strategy of Excellence”, underpinned by discipline and willpower, is deeply present in the city state’s culture to this day. Following the era of British decolonialization and a failed attempt of merging the small island nation with ist larger neighbor Malaysia, Lee willed a country into existence in the most harsh of circumstances: A population that consists of three ethnicities without a common culture or language, a landmass so small that agriculture was hardly an option, and an absence of minable natural resources. Nevertheless, over the course of one generation Lee transformed a swampy island at the southern tip of Asia into an economic powerhouse like the world had seen few others. But while Kissinger doesn’t entirely sidestep the thorny question of democratic vs. autocratic rule in Singapore, his take on the topic feels more apologetic than critical.

Finally, the book returns to Europe and to another controversial, yet striking, personality: Margaret Thatcher. Her “Strategy of Conviction” can be almost be interpreted as a historic parallel to Charles de Gaulle’s relentless perseverance. But with Thatcher, that very same quality that led to her greatest successes (such as Britain’s victory in the Falkland conflict or her ending of the miners’ strikes) also paved the way to her demise. The project of increasing European integration (and thus ceding national power to Brussels) was favored at the time by many even among her own party, yet was always met with her infamous “No, no, no!”.

Summing up, Kissinger’s latest book is a impressive on many levels. The fact that the man was personally familiar with each of the protagonists adds a layer of intimacy that few other historic accounts which cover such a long timespan can provide. That impact is most prevalent in the chapter on Richard Nixon, but reverberates throughout the others as well. The important role Kissinger played in Anwar Sadat’s negotiations with Israel for example is neither exaggerated nor is it downplayed.

Kissinger’s account of the six different personalities and leadership styles is a very worthwhile read, both for the historically curious as well as for the student of political strategy.