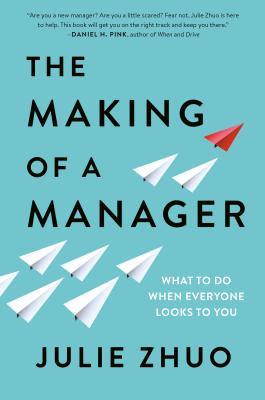 The Making of a Manager: What to Do When Everyone Looks to You

Despite its odd title, Julie Zhuo’s “The Making of a Manager” is not just a step-by-step guide for how to grow in a management position. It’s more of a survival guide for those who are new to leading others, a map for the uncanny territory of building, developing, and leading teams of people towards a common goal.

The author herself was one of the first product designers at Facebook and, as the company rapidly outgrew its startup structures, also one of the first to lead a team of designers there. In her own words, the book aims to cover everything she wished someone had told her back when she first took on that challenge: Advice ranging from how to handle the awkwardness of suddenly being your former peers’ supervisor, the difficulties in giving (and receiving!) feedback in a useful way, how to deal with the raw stress induced by everyone now demanding their share of your time, how to run effective meetings, and the thorny topics of hiring and firing.

One certainly doesn’t have to be a fan of Facebook’s culture or products in order to benefit from Zhuo’s writing. While she does occasionally refer to some of the companies’ high profile managers, including Sheryl Sandberg and of course Mark Zuckerberg, she elegantly sidesteps most of the controversies that enshroud the social media industry. Instead, she focusses purely on the practicalities of managing in high growth environments, including the added challenges that arise from leading teams of managers instead of individual contributors.

Honestly, I hesitated for a long time whether or not to pick up “The Making of a Manager”. The term management itself after all has become slightly tainted in recent years, with much more emphasis now being put on leadership—the difference between the two often being blurry of course. Also, the author’s Facebook background had me cringe quite a bit. Nevertheless, I’m happy that I gave the book a chance: It is indeed a treasure trove for anyone who’s put in charge of leading groups of people to achieving results. And while there’s a bit more meat to the bone for formal managers for sure, including how to hire, fire, promote, and develop, informal leaders such as product managers, scrum masters, or lead developers can also take away a lot from Zhuo’s writing.