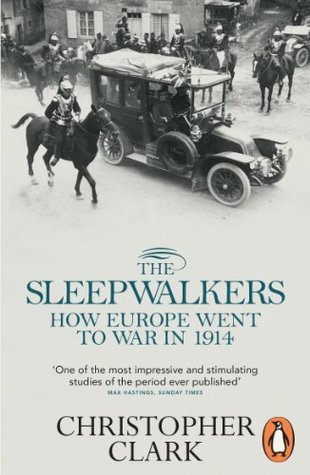 The Sleepwalkers: How Europe Went to War in 1914

When Gavrilo Princip pulled the trigger of his gun on June 28, 1914 in Sarajevo, the world changed forever. The war that broke out thereafter was one of unprecedented destructiveness, claimed millions of lives, and would shape the history of the entire 21st century. But how, exactly, was it possible that a singular event like this one would result in something as catastrophic as the First World War?

Christopher Clark’s 700 page epos makes one thing clear: Any monocausal explanation, such as “German Expansionism”, “Austrian Revanchism”, or “Russian Ambitions on the Balkan”, will fall tremendously short of depicting what actually happened. The historian rather begins by tracing the the European power structure back to the early 19th century, details how former multipolar relations slowly crystallized into opposing blocs, and how legal treaties, moral obligations, and strategic interests confounded into an explosive device which was practically waiting for its fuse to be light in 1914.

But Clark also cautions against the simplistic assumptions that each country involved acted as a single, unified entity. Instead, he goes to great lengths to explain how the different levels of political, military, and monarchic leadership in Austria-Hungary, Germany, France, and Russia interacted in—often in ways that contradicted or reinforced each other. He furthermore outlines the roles of mass media, public opinion, and the need for popular approval that helped to raise the tide of particular individuals and policies, even if they were at odds with their countries’ best interests.

On some level, Clark concludes, the problem with the origins of WWI is not the lack of information available to the historian. It’s the abundance. Making sense of all the different streams of data, ranging from newspaper reports to diary entries to the official records of the nations involved is a sisyphean task. The author does his best though to draw a nuanced, yet clear picture of the events that lead up to the declaration of war of July 28, 1914, and how each country participating in the ensuing struggle came—almost rightfully—to view itself as being involuntarily dragged into it.

However, the author does not exculpate any of the individuals in question. Quite to the contrary, he shows how time and time again, ambassadors, ministers, and even monarchs would have had the possibility to avert the looming crisis with the stroke of a pen, but then chose no to do so for various reasons.

In this regard, Clark’s book is enlightening above and beyond mere historic interest. It shows how complex political and economic systems can interact in ways that end up being detrimental to all parties involved. In the final chapter, Clark himself draws up a comparison between the events of 1914 and those at the brink of the European financial crisis almost a century later. More recent examples, such as the Coronavirus pandemic or the Russian war against Ukraine, will undoubtedly come to the readers’ minds as well. Interpreting these episodes as the results of complex, interconnected systems interacting with each other, rather than through a lense of simplistic black-and-white thinking, is surely a helpful exercise for which Clark and his analysis of the events that led Europe to war in 1914, provides an excellent blueprint.